CYPRESS, Calif. – (February 2011) –  The second of two ship’s bridge training simulators at the US Naval Academy (USNA) in Annapolis, Maryland was recently commissioned to assist underclassmen to learn ship’s navigation and safety on the high seas and in scores of harbors around the world. These USNA bridge simulators are built by Kongsberg Maritime Simulation Inc., which in turn relied on design and service support from Electric Picture Display Systems, Inc. of Melbourne, Florida and state-of-the-art simulation projectors from Christie Digital Systems USA, of Cypress, California.

The USS Storm was commissioned in late November 2010 and was used by more than 180 underclassmen per day in December 2010 alone. Up to 4,000 students are expected to use the simulators for training this year. Reaction has been highly favorable, as the varied scenarios and vivid, real-world detail provided by the simulations are the next best thing to being there. The USS Doyle simulation bridge was completed in December, 2009.

“The US Naval Academy needed a durable, low-maintenance solution that could provide its students with realistic training scenarios all day, every day. Our solutions, anchored on Christie’s projectors, are helping them do just that,” says David Meers, account executive for Kongsberg. “We provide our customers with reliable, ready-to-use ‘workhorse’ simulators, without a lot of extra features they won’t often use, and this is getting a great reception in the marketplace,” he added.

Each simulation room includes seven projectors arranged in a 1×7 array, to provide a field of view of about 210 degrees in one room and 205 degrees in the other. The simulator for the USS Storm projects images 12 feet high, while the USS Doyle features images of eight to nine feet in height.

“Both installations demanded market-leading technical reliability and outstanding image quality.  By using three-chip DLP® we ensured the visual punch needed by supplying the entire color spectrum. This is especially vital for the USS Storm, which projects detailed images 12 feet high and 16 feet wide for each channel,” says R. P. Higgins of Electric Picture.  As well, Christie’s service and support is the best and they respond quickly and professionally. This is important for all customers, who typically plan on working their simulators for a minimum of five years, and therefore need to know that their projectors are up to the task,” says Mr. Meers.

The database feeding the USNA system incorporates images from all types of ships, including giant aircraft carriers, destroyers and submarines. The simulators help the academy provide the most effective training available, preparing its graduates for leadership roles throughout the US Navy.

“The second bridge was a greater technical challenge, since it involved a larger display area with increased height, shorter throw lenses and required a large overlap of each projector’s throw, but Christie has a number of features to meet the challenge,” added Meers.

For example, ChristieTwist has an easy-to-use GUI that runs on an external PC and enables users to configure many of the features of the hardware board. And Christie AutoCal provides automatic display system calibration, giving the end user expert image display adjustment via a simple checkbox interface. This feature allows the user to re-calibrate both geometry and blending with superior accuracy, efficiency and ease.

The United States Naval Academy was founded in 1845 by the Secretary of the Navy, George Bancroft, in what is now the historic town of Annapolis, MD. The Academy gives young men and women the up-to-date academic and professional training needed to be effective naval and marine officers in their assignments after graduation. For more information, visit www.usna.edu.

Melbourne, FL (April 2013)  Electric Picture Display Systems has been awarded a contract to provide a projection system upgrade to the Center for Marine Simulation, an industrial arm of the Fisheries and Marine Institute of Memorial University in Newfoundland, Canada.

The installation will utilize nine high-resolution projectors in a 360-degree array creating an image 20’ high by 210’ around. This Full Mission Bridge Simulator is one of only two in the world that uses a 6 degree-of-freedom motion platform.

“Electric Picture beat out much larger competitors to win this contract,” states RP Higgins, President and CEO of Electric Picture. “The fact that a world-class simulation facility all the way up in northern Canada would reach down to Melbourne, Florida, for expertise and services is testament to our reputation in our industry.”

Visionaries at Electric Picture Display Systems in Melbourne are riding the wave of new technology much like the worlds they create for full-scale training simulators.

“It started in my garage,” said Higgins. “We didn’t have all of these flat screens; at the time we had video projectors. I had come from the video projection industry. The idea was to start my own audio visual services company, and I saw opportunities with things like (flight) simulators.”

From that simple idea, factoring in and reacting to constant advances in video technology, along with the possibilities created by extremely lifelike simulated training environments, Electric Picture Display Systems has evolved into producing things they wouldn’t have dreamed of a decade ago, e.g. the integrated visual displays and projection systems with imagery for training pilots, ship captains and train engineers.

Bringing the Virtual World to Life

Operation Manager Craig Beam demonstrates a simulator for a boat captain to learn the intricacies of the Halifax Harbor, complete with the subtle rocking of the seas, on 20-foot screens in their Melbourne facility. The virtual ship’s console is identical to the real thing and is oriented in the middle of the screens to help create the illusion of water in all directions, except for the virtual bridge, as far as the eye can see.

“It’s nine computers feeding the same 360-degree projection screen,” Beam explained. Added Higgins: “This teaches you how to navigate. When you’re completely surrounded by video, you become immersed in it because if something is still and something’s moving, your eye catches it.”

With such success at sea, on land, and in the air, even more uses for the training technology are being developed, said Higgins. “The cool thing that’s happening now is we’re getting into air traffic control training.”

The company also offers control room displays for 24/7 continuous monitoring where security personnel need to monitor areas and situations; the company designs, engineers, fabricates and installs the state-of-the-art systems. “It’s for utilities or military and it stays up because it needs to monitor 24/7. The monitors and the projection systems were built to go a long time,” Higgins said.

Electric Picture has installed similar systems for Harris Corporation and the City of Lakeland utilities.

The other portion of the business involves integrating audio, video, and conferencing equipment in a variety of settings, including collaborative meeting and classroom environments and increasingly large churches that want to drive home the message on large screens in the main sanctuaries, Higgins described. “One of our early systems was at First Baptist Church of Orlando, a 24-foot projection screen which we replaced eight years later,” he said.

Thinking back to the garage days, Higgins recalled the business has taken unexpected turns, but has not strayed far from the initial idea. “My original plan was 50 percent simulation, 25 percent network operations, 25 percent audio visual. Those percentages fluctuate but it is still our core business. Things are growing and we’re getting opportunities some of the big boys aren’t, because we’re giving customers a good value.” 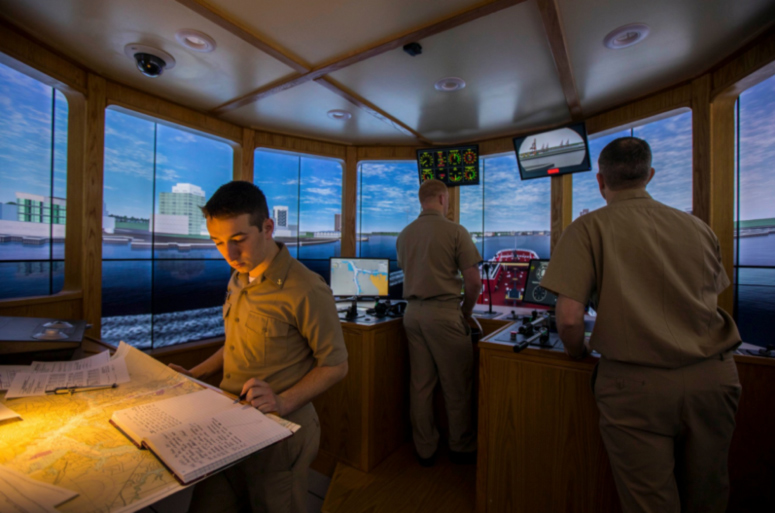 Melbourne, FL (October 24, 2016) Electric Picture just completed 360° simulation display for GM Tech Center – Warren, MI. It is the first 4K Driving Simulation system in North America. Many thanks to: RealTime/FAAC for the opportunity; to Canon Projection and their support team; to Scalable Display Technologies for their incredible blend/warp application software (and Matt McGowan), and to Electric Picture’s Craig Beam, Joey Bruton, and Tommy Miller for helping to ensure this was a big success.

Electric Picture is expanding their facilities from 4000sf to 6500sf, to include light manufacturing, kitting, warehouse and shipping areas.